Rome has a wealth of underground sites which can be visited.

Here are just a few of our favourite suggestions:

Getting tickets for a tour under St. Peter’s Basilica takes a little pre-planning but will, without a doubt, be one of the highlights of your visit to Rome.

The ancient necropolis where St. Peter was buried, and on which Constantine built his original basilica, is run by the archaeological office of the Vatican and visitor numbers are strictly controlled each day to protect this special environment.

The visit takes you through the foundations of the basilica, down one of the streets of the necropolis, where you can admire some of the painted tombs while the guide tells you the story of the discovery of St. Peter’s tomb.

To get tickets, you need to write to the UFFICI SCAVI with the following information: the exact number of tickets you want (groups can’t exceed 12), the language of the tour, the possible dates, the names of all the participants and your contact details. Without all this information, they won’t process your request!

Many visitors think that the catacombs are only on the Appian Way, where in reality all the streets which led from Rome were lined with these ancient burial sites.  Easy to get to with the metro (Line B1 to S.Agnese/Annibaliano), are the catacombs of Sant’Agnese, one of the many young Roman women who were martyred for their faith. Go through the church to the tiny office and ask when the next visit in English will be – often times you’ll have the guide (a Christian archaeologist) all to yourself! You may have to wait a bit, but this is such an interesting site.

Visit the lovely basilica, with its numerous depictions of female saints, and follow the signs round the back to the church of Santa Costanza, once the mausoleum of Constantine’s daughter, now converted into one of the city’s few round churches. In front of this are the remains of a basilica, also dating back to the Constantinian age.

Today, Villa Torlonia is a museum and the gardens are a public park, but during the Fascist period, it was home to the Italian dictator, Mussolini and his family. Around the park are 3 air-raid shelters, built to protect the family when the city was being bombed. Tours of the bunkers are run by the organisation ROMA SOTTERRANEA, who you can contact to request tickets or a private visit.

On the quieter side of Trastevere, the Basilica of Santa Cecilia is dedicated to another of Rome’s young female martyrs. As you enter the basilica, turn to your left and you will find a door to the archaeological area (this closes just before services).

Buy a ticket and downstairs you’ll find the remains of a wealthy Roman’s house, where the saint is said to have lived. The explanations are all in Italian and it isn’t always clear what you are looking at, but the space is impressive. At the end you come to the cosmatesque-style crypt containing the relics of St. Cecilia. 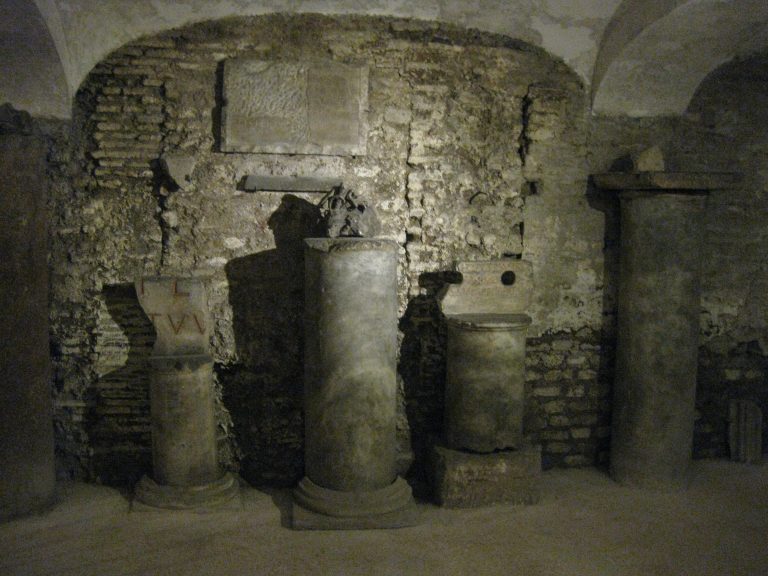 This Site not far from the Trevi Fountain, is open to visitors throughout the year (closed Mondays), though it’s far more interesting if you arrange a guided tour with the organisation that is responsible for the site, Archecodomani.

The ruins were discovered, as they often are in Rome, during restorations of the building above, in this case, a cinema.

Below were discovered part of an ancient domus and the castellum aquae, reservoir constructions for the nearby aqueduct, which still today supplies the Trevi Fountain.

If you are expecting ruins on the scale of the Colosseum, then you will be disappointed, but it’s an interesting visit for those who are intrigued by the way Rome has developed layer upon layer over time.

The Baths of Caracalla (summer months only) https://www.coopculture.it/heritage.cfm?id=6

Under Rome’s largest baths are a complex system of tunnels used to keep the baths heated and serviced.

Buy tickets in advance through the Coopculture website and on summer evenings you can visit the baths for this fascinating tour which includes one of Rome’s surviving mithareums, temples dedicated to the Eastern god Mithra. The tour is worth it for this alone.

The mithraeum is the largest one known to have existed and, although like the baths it has been looted through over time, still it gives an intriguing idea of what the practices of worship would have been in this ‘mystery religion’.

Another mystery religion can be found under the Rome-Cassino railway line! When the line was being built, an underground basilica, the only known meeting place of the Neo-Pythagorean movement.

Unfortunately the basilica is in constant danger from the trains overhead, so you cannot go inside the main structure, but even from the vestibule you can see most of the room and some of the stucco decorations which have survived.

The basilica can only be visited on the 2nd and 4th Sunday of the month, so tickets need to be booked through Coopculture, well in advance and there is a flat rate for the entrance + guide for up to 20 people.

This church in the ancient vegetable market, has, like many of Rome’s oldest churches, recycled the materials from previous buildings. On one side is a line of doric columns from one temple and on the other ionic columns from another, which are even more impressive when you go under the church and can appreciate the size of the pedestals on which they stand. 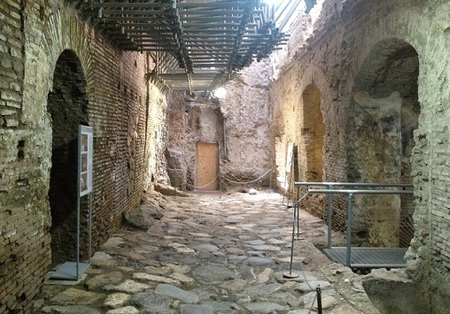 On the Celio Hill, under the church of Peter and Paul (Pietro e Paolo) and the most famous of Rome’s ancient houses. As well as seeing beautiful decorations, you’ll also find yourself walking on a Roman street as you move between the different houses and four centuries of history in the Case Romane.

Other Roman houses can be found under Palazzo Valentini. Although now a popular site, there is little to see of the houses that once stood here. While listening to a description of life in ancient Rome, light projections indicate where the walls and structures would have been.

The most famous house of ancient Rome is undoubtedly the monumental Golden House of the emperator Nero. The underground tour will take you to a small part of the massive “pleasure palace” that once stretched over 100 acres across the city center, but parts of walls can still be seen above ground, and it is the reason Nero’s successor, Vespasian, had the Colosseum built where it stands today.

Inside, the size of what little remains is incredible as is the virtual reality reconstruction which attempts to show what the palace and the surrounding landscape would have looked like in Nero’s day.