The magic of Christmas and New Year in Amalfi 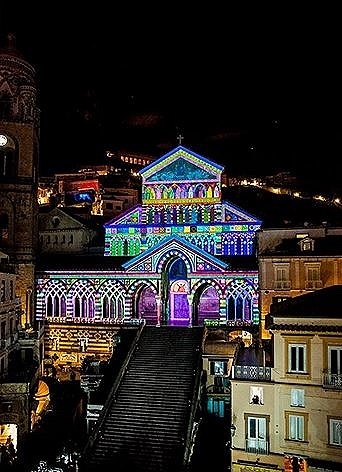 The magic of Christmas and New Year in Amalfi.

Between ancient traditions and evocative events, the calendar of events promoted by the Municipality. The descent of the star illuminates the night of Christmas. In the square with Luchè on New Year’s Eve Starting from December 7th in Amalfi, the program of Christmas events. Unmissable events such as the descent of the star on the sea of ​​Amalfi on the night of the 24th, the traditional review of the Author and the polyphonic choirs in the Cathedral, the New Year with the midnight fires on the bay of Amalfi and the party in Piazza Duomo, which year will be with the Neapolitan rapper Luchè, are the heart of the program. Do not miss the tradition between the suggestions of pipers and bands, the live nativity scene in Pogerola, concerts and Christmas markets. These are the ingredients of the varied program of events promoted by the City of Amalfi, edited by the Councilor for culture, traditions, cultural heritage and events held by Enza Cobalto, for the upcoming holidays and which will animate the city for an exact month. In the highlight of the Christmas atmosphere, whose air you can breathe for a few days with the lighting of the lights on the eve of the patronal feast of Sant’Andrea, will start from Saturday, December 8 when the notes of the bagpipe will invade the city sin from the morning (the pipers will repeat themselves in their evocative parades for the center also on days 9, 15, 16, 22 and 25 December) while in the afternoon (at 4 pm) the “Città di Minori” band will parade. In the morning the Christmas Markets of small antique, vintage, vintage collectibles and creative crafts will be inaugurated on the Lungomare dei Cavalieri and in the afternoon (from 4 to 6 pm) the first appointment at the Museo della Carta  http://www.museodellacarta.it/ with the creative workshop for children “La Letterina di Natale on Carta a Mano “which will be repeated on December 9, 15 and 22.

On the day of the Immaculate Conception there are also two other events in Amalfi that are part of the “Christmas Experience” program promoted by the Grand Hotel Convento http://www.ghconventodiamalfi.com/it/  : at 17.00 the arrival of Santa Claus in the Cloister of the Capuchins (the event will be repeated on December 22nd) and the musical event “Christmas Symphonies” (6.30 pm) in the Church of S. Francesco by the teacher Giovanna Russo. On the eve of the Immaculata we also note the Christmas Market, scheduled in Largo Spirito Santo, organized by the Day Center for disabled children in Amalfi.

Sunday 9 December, 6 pm, “Christmas with Muhlfed Quartet” concert, scheduled at the Cloister of the Capuchins; at 7.30 pm inauguration at the Arsenale della Repubblica of the artistic nativity set up by the Horizons Sereni Association. Until the evening the Christmas markets on Lungomare dei Cavalieri will remain open for the second consecutive day. Organized by the La Soffitta in Piazza Association, the initiative will also be repeated on 21, 22, 23, 24, 20, 29, 30 and 31 December.

Saturday, December 15, starting at 17, Amalfi hosts the sports memorial “Rupert’s Trail – Urban Night Race” which will participate in dozens of athletes who love running. It is a suggestive night edition of the competition, which will take place between the stairs of the villages of Amalfi and the paths of the Valle delle Ferriere http://www.valledelleferriere.it/. Departure and arrival are fixed in Piazza Municipio. The proceeds from the event will go to support the Italian Association for Cancer Research. At 6 pm, at the Cloister of the Capuchins for “Cristmas Experience” a concert of bagpipes and ciaramella “The Christmas Traditions” is scheduled.Sunday 16 December from 10.30 to 13, “Amalfi Christmas Lab”, artistic workshop of creative painting and artistic crafts for children and young people scheduled at the Arsenal of the Republic. Following, (20 hours) recital of beautiful singing between opera, waltz and song, with soprano Colette Manciero and Luigi Angelo Maresca at the piano.

Saturday, December 22nd “Christmas Experience” with the arrival of Santa Claus (17.00) and the Christmas Concert at the Cloister of the Capuchins (18.30) with the Baritone Josè Lombardi of the Teatro Verdi of Salerno, accompanied by Franco Lombardi. Also at 6.30 pm, at the Arsenale della Repubblica, “The Nutcracker: Christmas story”.

Sunday, December 23rd, from 10:30 am to 1:30 pm and 3:30 pm to 6:30 pm, the Santa Claus Village returns to Piazza Municipio. This is a real village, for adults and children, with houses, sweets and lots of games and activities, where you can have fun with friends, waiting for Santa. In the afternoon (5.00 pm) “Canti e Musiche Natalizie al Chiostro“, scheduled in the cloister of the Grand Hotel Convento. At 7:30 pm, at the Arsenale della Repubblica, the premiere of the InCanti d’Autore Christmas festival with the concert “Stella d’Argiento. La Cantata di Natale “, a show of prose and music by Giovanni Mauriello and Carlo Faiello, with the Santa Chiara Orchestra and voices by Sara Grieco and Matteo Mauriello. The Christmas Eve will be characterized, as well as by religious events (in Vettica di Amalfi, on the churchyard of San Michele conclusion of the Christmas Novena with movies and Christmas music, intervention of the bagpipes and convivial moment) from the traditional “Calata della Stella” at 11.45 pm accompanied by the fireworks display on the sea by the award-winning company Pirotecnica Cav. Vincenzo Senatore and sons. At midnight procession with the Child Jesus and the Pontifical Mass in the cathedral. The day of Christmas tour for the villages of Amalfi of the group of pipers that will bring the traditional lullabies in the squares of Tovere, Pogerola, Lone, Pastena and Vettica. At 6:30 pm Pontifical Christmas Mass in the cathedral. Wednesday.

December 26th, the first outing of the folklore bands in view of the New Year. At 4.30 pm fashion show from Via delle Cartiere of the “Amalfitan Folk New Year” group and at 6:30 pm Musical Tombolata at the Morelli Exhibition organized by the “Orizzonti Sereni” Pensionati Association.

Thursday 27 and Friday, December 28 at the cathedral of Amalfi returns, beginning at 18, “Amalfi sings Christmas” the spectacular Cori Polyphonic review now in its XXVI edition. Among the events also scheduled “The wonderful story of Christmas”, readings animated stories and stories related to Christmas Thursday 27 11 at the Arsenal of the Republic, and “The Bubble Show” by Alfonso Aversa, scheduled 28 at the Former School Complex of Tovere, 17.30 Saturday,

December 29, starting at 17.30, live nativity scene set up in the streets of the village of Pogerola (event organized by the Pigellulae Association in collaboration with the Associazione Sipario di Luce). In Amalfi, on the other hand, at 16.30, the parade of the “Amalfitan Folk New Year” Group and from 17 to 19.00, “Canti e Musiche Natalizie al Chiostro”, scheduled at the Cloister of the Capuchins. The New Year’s window will open with “Amalfi Christmas Lab” workshop for creative painting and artistic crafts for children and youth at the Arsenale della Repubblica (10.30am – 1pm) and in the afternoon (4pm) “Amalfitan New Year’s Party” group parade “With exhibition in Piazza Duomo. From 5pm to 7pm, “Christmas Songs and Music at the Cloister” for the “Cristmas Experience”, and at 7:30 pm “La Voce del Natale” Concert, lyric evening of the award-winning Bandico Concert “Città di Minori” at the Arsenale della Repubblica for the second evening of InCanti d’Autore.

The eve of the New Year’s Day is to be experienced, as well as the night that will mark the transition from the old to the new year. The festive atmosphere will begin to breathe in the morning when from 11 am, the “Città di Minori” band will accompany the band of Din Din. In the afternoon, starting at 4.30 pm, the “Amalfitan New Year” band parade will return to the street one hour before midnight. In Pogerola, 7.30 pm, exhibition of the “Pogerolese Folk Group”, in Piazza Don Gaetano Amodio. The new year will be greeted with a show of fireworks and to follow a party in Piazza Duomo with live music and performances by the Neapolitan rapper Luchè.

The first of January Grand Concert of New Year with the S.C.S. International Harmonia Chamber Orchestra (12.15 pm, Basilica del Crocifisso) and in the afternoon a parade and performance on the stairs of the Cathedral of the bands of the “Amalfi Amalfitian New Year”.Wednesday.

January 2 at the Arsenal of the Republic (17 hours) is staged the story in music of one of the most beautiful classics of all time “The Beauty and the Beast”, a musical for families, with actors and singers ‘Associazione #CostieraCreativa, while in Pogerola.

Thursday 3 January at 6:30 pm, in the church of S. Marina, “La fabbrica delle Stelle” organized by the Pigellulae Association. Friday, January 4, Tarantella musical show “Sorrento Folk” at the Cloister of the Capuchins (from 17 to 19) and at 18:30, at the Arsenal of the Republic “La Cantata dei Pastori”, extracts of a classic of the Christmas tradition of Campania care of the Pensioners Association “Horizons Sereni”. Also at 6.30 pm, “Gran Tombolata Vettichese” and III edition of “La zeppola del Villaggio”, at the Sports Hall Ex Fondo Fusco organized by the Associazione S. Michele di Vettica.

Saturday, January 5 from 4 pm parade and performance in Piazza Duomo of the bands of the “Amalfi Amalfitian New Year” and at 19:30 for InCanti d’Autore goes on stage the musical “The Miracle of Marcellin” (Arsenal of the Republic with the music of Mons. Marco Frisina and directed by Riccardo Trucchi) On the day of the Epiphany The usual parade of the Pastorelli, accompanied by the bagpipers, will open (11.30) the last day of the party whose program will continue in the afternoon (4.30 pm) with the parade of the “Amalfitan Folk New Year”. The Christmas holidays will end with the Pontifical Holy Mass in the cathedral and with the Child’s Reposition.

Enjoy your Christmas and New Year in Amalfi